One fact that has emerged from the sighting of a White-tailed Eagle with a Norwegian colour-ring is that the Norwegians themselves were unaware of the first sighting of a bird in 2001 and 2002. This short article gives details of the first sighting. For more on the bird present this winter see Brydon Thomason's article on the Shetland Nature blog.

The first bird was seen in 2001. It may have been the bird that flew north over Fair Isle on 21st May, as it was assumed that this bird was the same as a bird found by Steve Duffield on Hermaness on 27th May. It was flying along the western cliffs and, in the early days of mobile phones, he managed to get a phone call through to us. We (Mike and Margaret Pennington) headed off and, based on the directions we had received from Steve, we headed up the Milldale at the south end of the reserve, hoping to intercept the bird. We did better than that, as the bird flew straight down Milldale and passed right over our heads, no more than a few metres above our heads. As it flew over our heads it was obvious that it was bearing a single blue colour-ring. There was no sign of any other colour-rings or tags, although there was a metal ring on the other leg. I no longer have my notes so can't remember which leg bore which ring.

Enquiries were made about the colour-ring and we were told that it indicated that the bird originated in Norway. Obviously, this information was never passed back to the Norwegian authorities.

We aged the bird as a first-summer, as it was clearly in very immature brown plumage, although the recent bird on Unst (ringed in 2011 but still looking like a first-winter) shows that ageing by plumage is not always reliable. 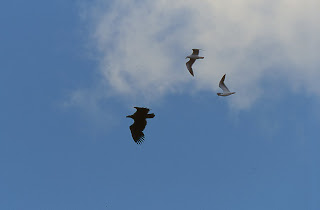 This particular bird stayed on Unst for about five weeks and it was seen by many observers. It was usually seen by watching from the hill of Sothers Field, on the slopes of Saxa Vord. It was also seen flying over Gutcher on Yell on 6th June (but was back on Unst the next day), over Whalsay and Olnesfirth in Northmavine on 9th June (but was back on Unst the same afternoon), and in north Mainland again on 13th, 14th and 28th June. It was last seen on Unst on 1st July and finally at Basta Voe on Yell on 3rd July. Unfortunately, in the days when digital cameras were still unusual, there seem to be few photos of this bird, and the best shown here, was taken by David Tipling at Gutcher on 6th June, but shows little detail.

Intriguingly, in 2002, an immature was seen in the central Mainland of Shetland, near Vidlin, on 27th May, north of Ronas Hill on 24th June and at Hillswick on 30th June. On at least one of the first two occasions it was seen by N. Aspey, who also reported that the bird was carrying a blue colour-ring. This was presumably the same  that was seen in 2001, although where it was for almost a year in between is a matter of conjecture.
Posted by MIkeP at 20:25

A blog to complement the information at the main site at www.nature-shetland.co.uk.

Hopefully, this will be a place for a wide range of extra information that doesn't currently fit in with the current relatively static information pages or with the frequently updated 'date-stamped' news pages, and it will enable us to bring a flavour of ordinary days in Shetland, as well as the extraordinary, whether it is encounters with Orcas, new species to Shetland (not just birds!), special events or tracking down colour-ringed migrants.

If you feel you have something to contribute then get in touch administrator@nature-shetland.co.uk .